Tessie Two Step came to live with us as a yearling.

Rob and I were newlyweds and life was full of possibilities. He was a farrier, I was a life-long rider; I had done a lot of showing, having started and trained some youngsters with relative success. I’d helped with the 4H club, given lessons and worked with other people’s horses. I thought (cough) that I knew all I needed to know. I had visions of getting back into the show ring and bringing in a few outside horses to ride to supplement our income. (cough, again) We scraped together enough money to buy a little farm and set about making all this happen.

To say things did NOT go as planned would be a massive understatement.

The first thing we did was buy a pretty dark filly with four flashy socks and a blaze. I quickly discovered that I did not know all there was to know about starting colts. All of our animals have tended to be “colorful” and Tessie was no exception. Unfortunately, Tessie’s quirkiness manifested in not-so-good ways. She was alert, flighty, and extremely sensitive. She was a quick study, and easily learned everything she was taught.
But she could be distracted and difficult. And so it went at shoeing time. She knew the drill, and would stand quietly for a while. Then, during the nailing, she would get fidgety – and suddenly jerk away.

As the new wife of a farrier, I failed to fully grasp the concept of the seriousness of this act.

An unwrung nail, being jerked through a farriers’ legs, could easily sever a femoral artery. A potentially very serious (if not fatal) injury due to swift, massive blood loss.

Most farrier husbands and wives will have no difficulty envisioning the subsequent scenarios. No farrier who works all day on other people’s difficult horses wants to come home and be treated badly by one of his own. He was frustrated that I couldn’t get her to stand quietly, and I was frustrated that he was frustrated. All this tension just made the horse crazy, and none of the usual restraint tricks did anything but make her worse. On the days that she behaved, I took hundreds of photos of her beautiful frame; she was to become the subject matter for several pieces of farrier art, and later, products. This painting was printed as postcards, they’ve been sold out for years but occasionally still show up for sale on ebay.
This cycle continued for several years – with varying degrees of intensity – at some points involving talk of sale barns and/or bullets, and at most points involving profanity. Like Michael Johnson in his profoundly spiritual book Healing Shine, I knew there was a good horse in there somewhere, but for the life of me didn’t know how to keep that good horse with us when we needed her. In the end it was easier just to move into the “This-Horse-Is-Crazy” camp and send her on down the road. The sale barn is often the first step down a slippery slope to the slaughterhouse for many horses – and from time to time I would feel a pang of guilt – wondering what had happened to the pretty blaze faced liver chestnut mare…
Many years later, I was to find out. Imagine my surprise, when I got an email from a man who’d bought Tessie Two Step as an aged mare for his grandkids to ride. She’d been through many owners, but ultimately served as a broodmare and occasional riding horse for a Quarter Horse breeder for several years. This man then sold her to her current owner, whose wife had had a serious riding accident and was fearful about riding again. He told me that Tessie was the first horse he’d seen her ride with such confidence, and once she got back in the saddle, she didn’t want to get off! He raved about how she was broke the best – so responsive to the lightest touch – and to voice commands. I felt a little proud – as I was the one who broke her to ride and taught her the voice commands.

The “crazy” horse that we dumped at the sale barn was now serving the most honorable and valuable role – that of a steady, confidence inspiring therapist and child’s careful babysitter.

The irony of all this was NOT lost on me. My current horse Allie had begun to display some of that same “crazy” behavior that we’d seen in Tessie all those years ago. This time it led me down a totally different path, a new path that did NOT involve blaming the horse for being crazy, lazy, stupid or a myriad of other human character flaws. I continued to work on developing a new perspective on how to interact with animals that is a whole lot less bossy and confrontational. I became a student of “new” ways, and my favorite books from this journey are here.

In the back of my mind I always thanked Tessie for starting me on that path. God had ultimately put her in a good home (not mine) and I was especially relieved that she’d gotten a just reward after her tumultuous start with us.

I became Facebook friends with her current owners and always felt a flood of mixed emotions whenever they’d post a picture of her. It was apparent she was getting the best of care; she looked beautiful and healthy even as she approached 30 years old. I was happy she’d let go of her anxiety and unpredictable nature, to be so steady for a woman who’d lost her confidence, and a troupe of grandchildren whose first experiences with her may inspire a lifelong love of horses. And it was always a reminder to me – that my own negative assessment of another’s character may NOT be as accurate as I think it is. 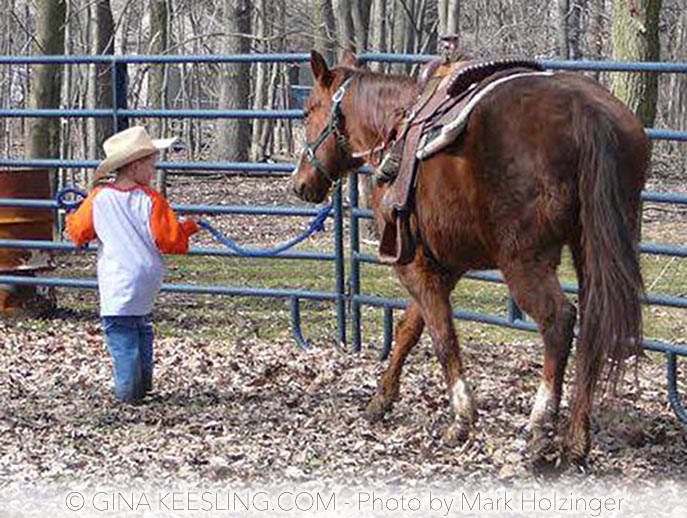 I shed a few tears one morning when I logged on and read these words:

Tessie Two Step is now grazing in the big pasture. She was 33 years old. Considered quite the handful in her youth, but in her golden years she gave Cindy the confidence to ride again and gave this young man the start to the horseman that he has now become. We had 13 great years with her and all of my grandkids got their start on her. A gentle giant that will be sorely missed.”
~Mark H.

RIP dear Tessie. I am sorry we misunderstood you, and I am thankful for all that you taught all of us.

My name is Jessica. This is going to be a bit random, but I recently found an article you wrote back in 2015 about your Quarter Horse mare, Tessie.

The reason it was so interesting to me, is because Tessie was my beloved Katie’s Dam. Katie’s lineage has always been marked off as not terribly remarkable, but I wanted to learn more about where my little mare came from. Katie is the light of my life. I got her when I was 14, she was 15, and she’d been passed through many hands, like Tessie. She’s been with me awhile now, and she’s still her spunky, sensitive, way-too-smart-for-me self. She’s helped frightened riders get back in the saddle, has carried me through so many ribbons, and been the greatest horse a girl could ask for.

I got her when she was older so I don’t know much about my own horse’s life. It’s something I’ve always wondered about, and it was so awesome to get to read about her Dam.

I know some say they’re “just horses” and it’s nothing to get sappy about, but reading such a sweet story about my horse’s mom really touched me.

Here’s a picture of Katie and I, maybe you’ll see some of Tessie in her.

Thanks for entertaining my rambles, and making me feel more connected to my horse 🙂

Want to read more about struggles (and insights) from horses?

Gina and the perfect HoofPrint is here

An Angel Called Rocky is here

The Taming of Anna Dusean is here

The Loving-Kindness Meditation is here

A story about trust and following your heart is here