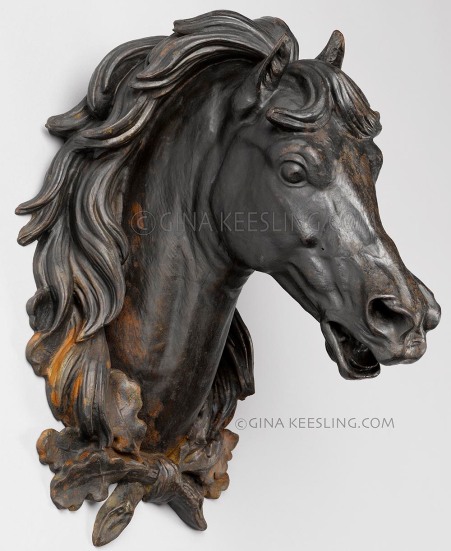 Breathtakingly beautiful, it was created in an era of true craftsmen; a time when attention to accuracy and detail were not spared.

I had to have it.

Except there was that small problem with the price. It was astronomical. The unshaven, road worn flea market vendor was no dummy. This was a treasure, and he knew it.

At this small town farm tractor swap meet, he had a price on this one item that would easily equal the contents of most other booths there. After some unsuccessful haggling, I left empty handed.

Two years were to pass… during which time I was able to research the piece and it’s possible origin. What I discovered was shocking. The flea market dealer claimed it came from a livery stable in Bloomington, Illinois. On the other hand, several equine antique dealers I contacted told me that it is a horse butcher shop sign from France. However, most of these were hollow, made of zinc, and often gilded or painted red.

Ultimately, I decided that in my house, it was going to be a vintage livery stable sign. After making arrangements to meet the nomadic vendor at yet another flea market, I went to the bank, withdrew a pile of cash, and the treasure was finally mine. 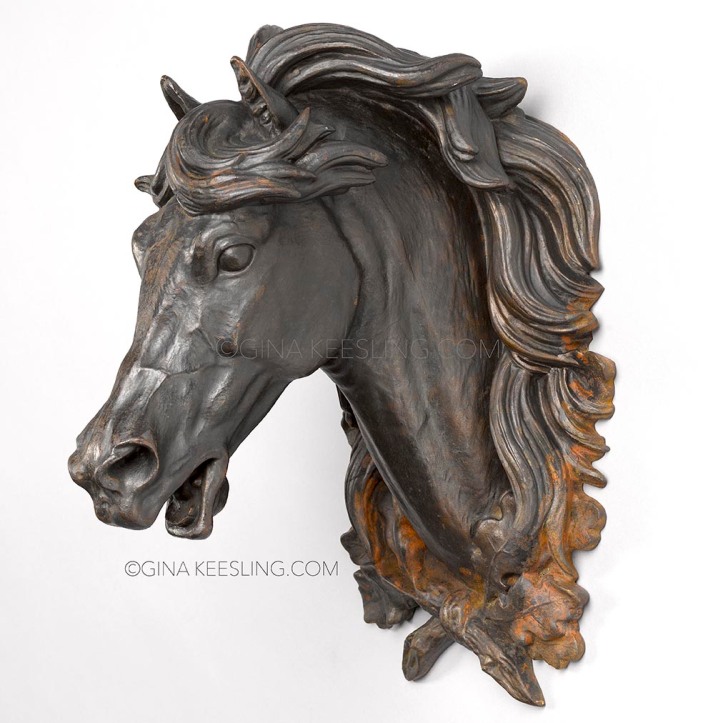 Measuring about 20″ tall x 18″ deep, this horse head is made of cast iron and appears to have it’s original finish. It weighs close to 100 pounds.

Once it was home and I could get better pictures, I contacted a number of foundries that specialize in restoration and reproduction of architectural iron decoration. No one had any further information, other than one comment that the quality of this piece puts it more in the category of sculpture rather than mere signage. 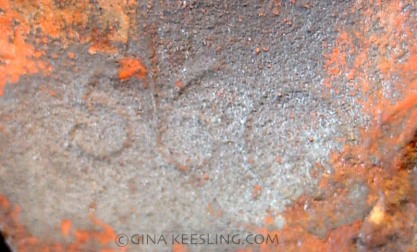 There is a mark on the back, but I have learned that not much is known about these old marks on iron pieces, as it has only recently started to be considered worthy of study and preservation. 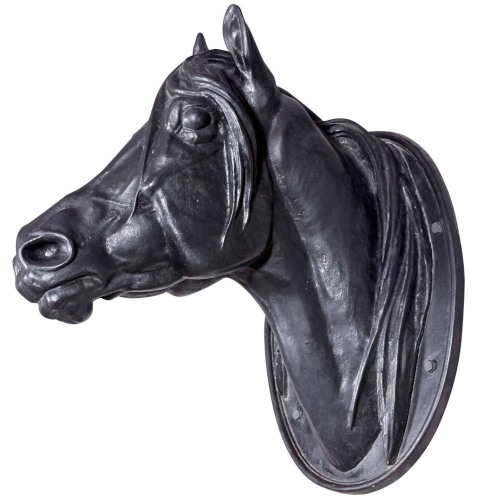 I was delighted to find another horse head in cast iron at an upscale antique dealer online. Originally a sign for the iconic Kauffman’s Saddlery in New York City, it’s for sale for the princely sum of (gasp) $75,000.

This is much, much more than I paid for my horse head, so finding this one did serve to assuage my guilt about spending so much on something that was destined to sit on a file cabinet in my office for a few years because it was far too heavy to hang on any wall in our 1800’s farm house. So much for displaying my new-found treasure; I often felt a twinge of remorse as I ran my hand over the finely detailed face sitting amidst books and papers in my HoofPrints office.

Then, as if the remodeling gods had planned it all along, the perfect place to hang the treasure materialized. After having our chimney repaired, it became apparent that the inside part of the fireplace and surrounding wall was in dire need of attention, too. We tore into it without a plan, other than to replace some damaged timbers in the wall, insulate against cold drafts, and install a more efficient wood burning insert.

After agonizing over picking the stone for the surround, and then choosing and prepping the barn wood beams that would make up the mantle, we came terrifyingly close to putting the TV above the fireplace. It all seemed so sensible. The room is small, there are few places to sit that let you enjoy both television and fire. Stacking the two seemed logical. And ugly.

Eventually, one of us realized the true solution to the problem. What could be more practical than fabricating from scratch a massive support system to display my treasured horse head above our beautiful new mantle? Rob fired up the welder and did just that.

I took a fair amount of flak over my excessively accurate cardboard replica, but it let us choose the most perfect spot on the wall with confidence and ease.

I still marvel that the round axe grinding stone (one of many that we found laying around the farm) was the absolute perfect size to surround the oak leaf laurel and mane of the horse head that fit up against the wall. Two completely unrelated items from the same era found themselves married on our wall as if they belonged together all the time.

What an amazing thing – all this stuff; hand hewn barn beams, millstones, an insanely heavy iron horse head… all acquired at different times – with no particular purpose in mind, have now converged in our living room to create this incredibly beautiful wall. I wish I could boast that we thoughtfully curated all the items with this vision in mind, and through careful orchestration, it became a reality. But, frighteningly, I suspect that it could have just as easily turned out like an episode of Hoarders.

Is this all I do? Post pictures and stories about life here on the farm? Nope! HoofPrints.com is my “real” job.

You can read more posts about horses here

For more fun on the farm, go here

Adventures in remodeling are here

Is the house haunted? There are some stories about that here