REMEMBERING PUPPY-GIRL after a tearful goodbye in 2015…

Puppy came to live with us 12 years ago. Like almost all of our dogs, she was unwanted by someone else – dumped here at our “house in the country”. Most disturbing about Puppy’s start here with us – was the fact that she was just a young puppy – not much past weaning age – and she ended up in the bushes in front of our house on a sub-zero January night. The struggle with frigid temps would later prove to challenge her throughout her entire life.

We already had three dogs, so intended to find her a home elsewhere (hence the uncreative name) but she charmed us all and ended up staying for good. There’s a story I wrote a couple years later chronicling all she’d taught us thus far with her cheery attitude in the face of painful adversity here.

The vets warned me when they did the reconstructive surgery on her injured hind legs, that arthritis would be expected as this dog aged. And they were not wrong. Her hocks grew straight and posty, and her back was often roached in her instinctual efforts to find comfort. Like all my animals, she was a management challenge. It was easy enough to relieve her pain via an arsenal of pharmaceuticals, but keeping her from over-doing it once she felt better was the larger challenge.

Anyone with arthritis will tell you that cold temps exacerbate the pain, and they did for my dog as well. I became an expert at constructing a warm environment in an unheated barn. The electric meter spun swiftly from the heat lights I’d plugged in, and many a night I’d lay in bed worrying, after I’d read online about a barn fire started by similar arrangements.

Winter of 2013 was one of the worst on record, and in spite of my best efforts, EVERYONE (including us) was cold and miserable. The internet was full of heart-wrenching stories of dogs freezing to death outside, contrasted by dozens of hilarious videos of dogs wearing protective booties on their feet for the first time. We were somewhere in between – my dogs have warm shelter, but farm dogs don’t wear booties. After one particularly trying night spent thawing stuff, warming horse and dog gruel, and watching dogs with freezing feet try to find the best place to potty, it occurred to me that it would not be many more winters before it could be necessary to make a tough decision for Puppy’s best interest. She’d slipped on the ice and had an injured shoulder – so was lame on 3 of her 4 legs in that terrible cold and deep snow.
Later that night, I plopped down in front of the computer for some distraction and instead am greeted by this verse by John Katz:
In the morning, the Divine Old Dog finds the sun,
she looks to me, she seems to be asking me something,
“where am I in life?” I think,
“what is happening to me?”
My legs, she says, are sore,
they don’t carry me far or fast,
I can’t catch that chipmunk in the yard,
I have always loved to run in the snows,
but my paws sting in the cold,
I need the sun,
like a cat.
I know where you are, Divine Old Dog,
I say, this is the glory and mystery of life,
fix yourself on the scent of light
and life,
hunt for peace and comfort,
that is your work now,
Divine Old Girl.
And her eyes say thank you,
they are filled with love and gratitude,
I will still protect you, she says,
to the end,
I know, I say, I know.
She looks at me once more,
can I talk to you again?
Anytime, anytime.

I shed many tears over the timing, and the irony of Mr Katz’s verse crossing my news feed at the time that we were facing similar challenges.

But it was forgotten, as we endured the hard winter, and just a few weeks later saw me posting this picture; my old, lame dog had spent days canvassing our farm pond, swimming in icy water, sniffing, chasing, DOING HER WORK. The whole family gives a collective cheer when one of these muskrats are dispatched, as they cause serious damage to pond banks.

Everyone who loves dogs should get to witness the obvious joy and pride that comes across a dog when praised for a JOB WELL DONE.

It’s a luxury farm dogs have that many others do not.
And it’s NOT the same as being praised for a training maneuver performed correctly.
These dogs get up and go to work every day, without being told. They work all day, without being directed – sometimes into the night if they see fit. They’re exhausted and cold and hungry when they finally finish for the day. But they puff up with pride, at being told they’ve done their job well. I will never forget how Puppy’s hunched back would become straight, her sore legs would resume their normal angulation, and her shivering would stop as I’d dry her with a towel, fluff her bed, and make sure the heat light was oriented just so, while telling her she’d done well.

Winter of 2014 saw us enduring the same shocking cold early in the season. I braced myself for more of the same, but am relieved when it warms up. Muskrat activity was early last year, but the water’s not frozen so the dogs spend their days patrolling, swimming, and digging. Now, a dog digging in pursuit of vermin is not very dainty about how they treat their nose. In fact, they use it a bit like a shovel. So, when Puppy-Girl shows up with a nosebleed, we suspect that aggressive digging has brought it on. We can’t find an obvious injury, she acts fine and the bleeding subsides, so we give it no more thought.

But, weeks later, we find out that we are wrong about the digging causing the nosebleed. It resumes, in a very bad way, and a subsequent trip to the vet reveals a grim prognosis – cancer.
The warehouse became a doggy hospice. Puppy eats her special meals with gusto. She mopes, and then she rallies. Most days she runs around, patrolling and barking. You’d never would have suspected she was dying.

Eventually, the bad hours start to outnumber the good. As with all animal keepers, we monitor, consider, consult the internet, cry, monitor some more… I’ve been through this many times and I just can’t seem to get any better at it. We did the best we could, and with the help of the kind folks at Alexandria Animal Hospital, Puppy-Girl went to Heaven on Friday afternoon in January 2015.
I posted the sad news on Facebook, and a friend shared the picture above as condolences.And another friend highlighted a portion of John Katz’s verse above, it’s so very fitting now in memory of my hard-working Puppy-Girl:

“hunt for peace and comfort,

that is your work now,

Rest in peace, my dear friend. It broke our hearts to see you leave, but at the same time we are so happy to know that you are pain-free now, and romping with your BFF Zack.

Even though it has been two years since she left us I sometimes imagine I hear her barking, or I look out at our other Black Lab Bailey, and think I am seeing Puppy-Girl.

These two are both black, but the similarities end there; when Puppy was alive I NEVER mistook one for the other, no matter how far away they were.

Some folks believe that our departed loved ones are always with us. How that manifests can be a matter of complex (and sometimes fierce) debate. I believe that, too, and sometimes a surprise in a photograph serves as a fun reminder. Shown here is a picture I took this fall. It was a clear, still night, with no recent rain and conditions were not dusty. I took several consecutive shots, trying to get Bailey to look at me – but this one is the only one that has the three circles in it (closeup here – the big circle is NOT the moon, the second is at the base of the chimney and the third is small, directly above Bailey’s left ear). Some refer to these as spirit orbs, to others they are just anomalous specks.

Whether it is true or not, it’s comforting to imagine that, as Beliefnet purports:

“When these “spirit orbs” or “angel orbs” appear near a single person or a group of people in a photo, it’s a sign that they are blessed with the goodness, positive energy, and protection of angels.  When orbs appear in a particular location, it’s also a sign that angels are hovering nearby and the location is particularly blessed.” 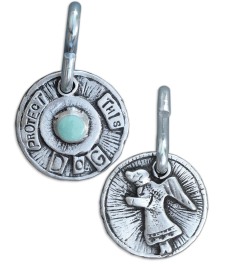 I know with all my heart that my Bailey is blessed with extraordinary goodness, and it’s also comforting to consider that my home might also be blessed.